from Sydney to London and everywhere in-between

Posted on November 8, 2015 By thewelltravelledman 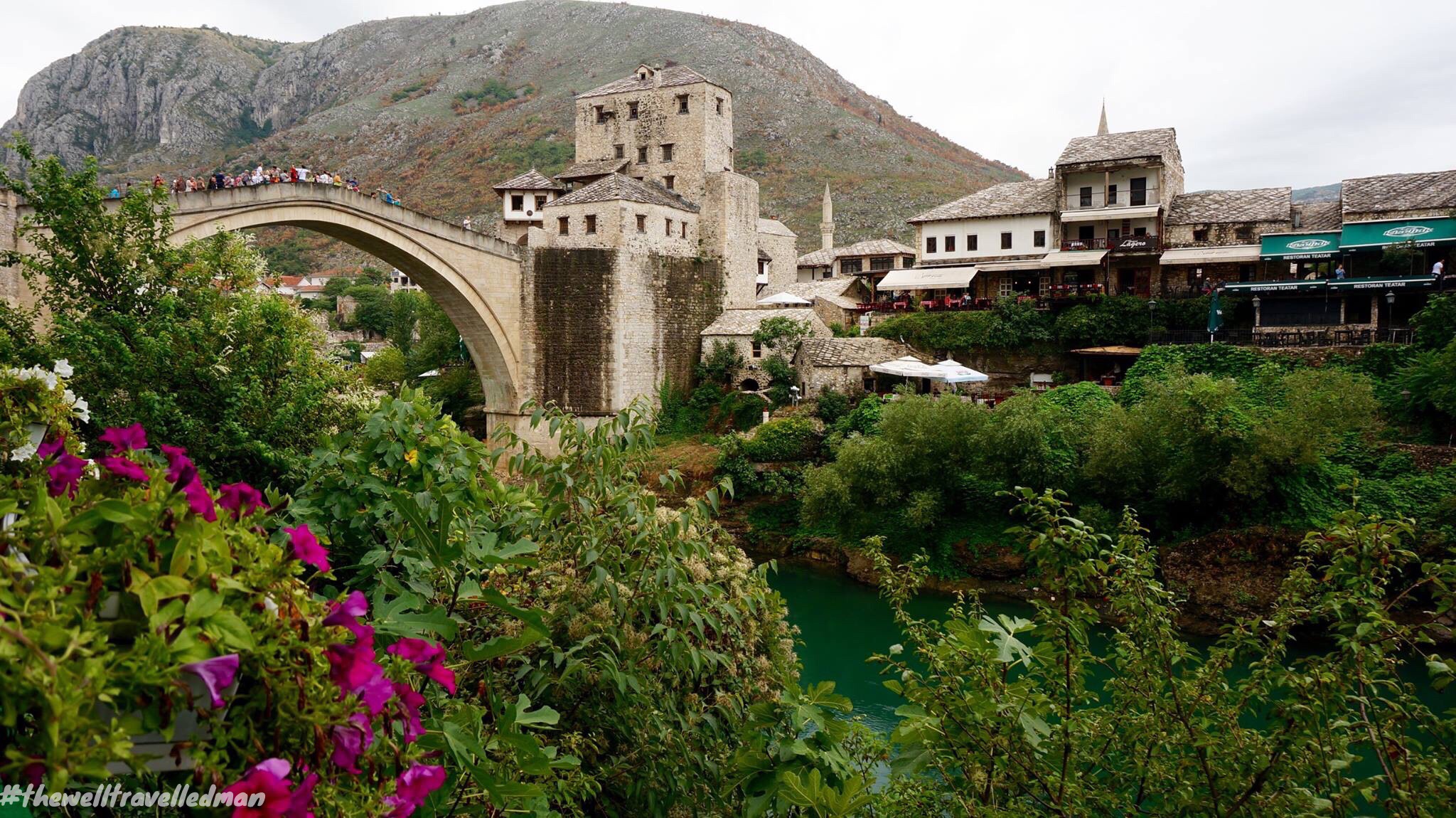 Thinking of ticking off an extra country during your stay in Dubrovnik?  If so, this post is for you!!

Dubrovnik is in the perfect spot for a sneaky road trip – within a few hours you’re able to escape the Croats and head deep into one of the neighbouring Balkan countries, rugged mountains and remote dirt roads!

After a whirlwind sailing trip from Split to Dubrovnik, we were torn between between the coastal towns in Montenegro and the hinterland of Bosnia and Herzegovina. Jenna was really keen to head to inland given we just spent the last week on a yacht, visiting coastal towns and islands, so we locked it in!

There were two main sights on our agenda… Kravice Falls and Stari Most in Mostar.

If you’re wondering the best way to see the sights, we can recommend hiring a car in Dubrovnik, and driving yourself.  There were four of us, so it made it very economical.  If you’re unsure about hiring a car in this part of the world, take a look at our Renting a car in Europe post for detailed information on hiring a car in a foreign country.  You can also book a day trip from Dubrovnik to Mostar, but they don’t stop at Kravice Falls.

Driving to Kravice Falls and Mostar

Kravice falls are around 40 km south-west of Mostar. Or, if like us you’re travelling from Dubrovnik, it is around 130km and 2.5 hours.

When you arrive at border control, they take your passports, stamp them and give them back to you and tell you to go ahead.  It all seems fairly standard and simple. However, what I did read before going was that Bosnia does not allow google maps (which we rely on for our GPS).  This completely slipped to the back of my mind. From the moment we crossed the Bosnian border, the Google Maps stopped repositioning the map and stopped telling us where to turn…

Luckily, the predetermined route (blue line) remained on-screen and whilst there were no street names we were able to manually reposition the map as we continued our journey. Now, Google Maps is set to the quickest road, not necessarily the best road!! There was a good chunk of time where we drove on a section of the ‘road’, or rather a dirt track which had more potholes than you can imagine – it’s like the Balkans let thousands of Gopher’s run-amuck hoping for a cheap tunnel to China! 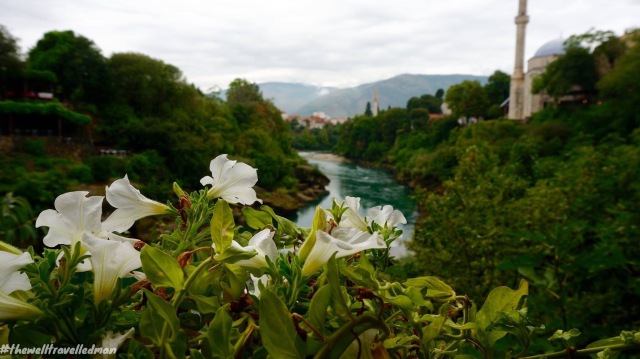 Having endured a slow and bumpy journey through the country-side, someone’s little bladder decided it was time to find a loo, so we were pretty pleased when we rejoined the tarmac with a glimmer of hope that there may be a service station or restaurant, which there wasn’t. Pulling up to local selling honey on the side of the road (and busting), Jenna jumped out to see if they had any tissues which she could use. Not a word of English. Acting out some serious disease where Jenna was furiously trying to act out the scene of blowing her nose, in the hope they might get to the need for tissues, she failed! Jenna was never very good at playing Charades!

Now – long story short, Jenna did find a toilet at a restaurant not too much further along our journey and the crisis was averted.

Getting to the general area of Kravice falls is straightforward – but finding the right spot without a working GPS isn’t. Consistent with our earlier experiences, the signage is scarce and you really do need to know how to get there. The falls are either referred to as Kravice or Kravica, neither of which we seem to pronounce correctly because no one knew what we were going on about!

Hopefully the below will help if you’re heading that way …

As I said, the drive to the general area is straightforward, 95% of the drive is along the main road where you’ll pass through a series of towns.  The one to look out for is Trebižat, and then you continue driving towards Studenci.  As soon as you reach the bridge (it will make sense when you get there!) you know you’re close. It’s around 5 km further before you’ll see a brown tourist sign which does in fact point you in the direction of Kravice Falls! Finally, you know you’ve made it!

There is a large parking lot at the top of the falls.  Bosnians accept either Euros or Convertible Marka (the local currency) so I wouldn’t be too concerned about converting your money. The cost was only a couple of Euro for both the entrance as well as parking cost. There is also a toilet block at just past the ticket office, which is free of charge.

The walk down to the falls is lovely and only takes around 5 – 10 minutes. 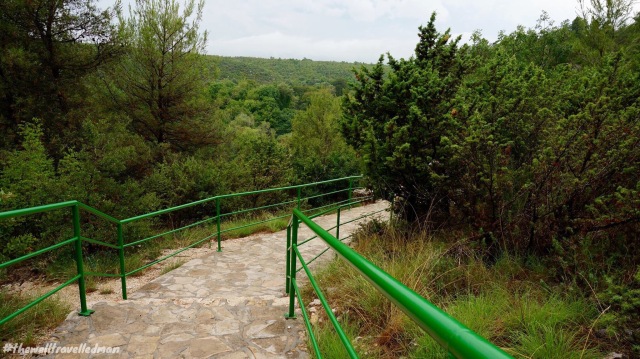 The day we were there, it was cloudy and a little rainy which was a shame as the water is supposed to look incredible when the sun is shining! Despite the weather, it was still breathtaking and well worth the drive.

There is a restaurant and a café down at the waterfall to either escape from the rain (or sun if you’re lucky!).

The service was good, they accepted Euros and the food came out quick – great spot to plan the next leg of the road trip to Mostar as you sit on the deck overlooking the falls.

There isn’t just one waterfall in Kravice falls, there are many falls – some larger than others.  The sound of the water crashing down is incredibly relaxing!

On a hot day, I’ve been told that a swim in the lake is a must – the water temperature is around 8°C all year round.

The drive from Kravice Falls to Mostar was much better – no dirt tracks and only 43 km.

When we arrived in Mostar, we drove through the city centre and started thinking to ourselves, what is this place…, it is so run down…, did we really just waste our time coming out here?  The quick answer is absolutely not! 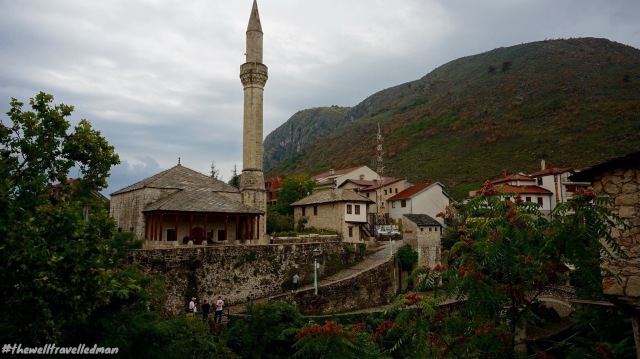 The old town of Mostar is beautiful and has plenty to offer.  Cobblestone streets, filled with market and food stalls, all of which made me feel like I was back in Turkey!

This is also where you’ll find Stari Most. Stari Most is a is a reconstruction of a 16th century Ottoman bridge which connects the two parts of the city. 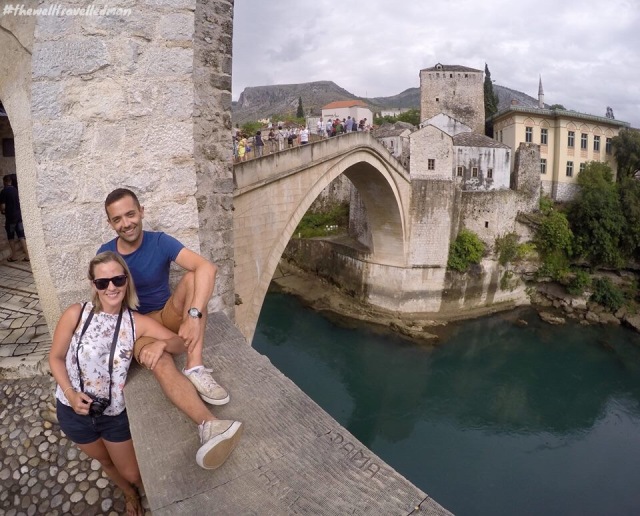 We were standing around with a big crowd, only to realise that a local dare-devil was about to jump off the bridge, into the river.  The bridge is over 20m high!  They walk around gearing the crowd up, get ready to jump to get you excited, and then walk around with their collection again.

This is a tradition dating back to 1664… as soon as the diver has a €20 donation, he is ready to take the plunge!  It was so incredible, we had to wait to watch the second jump… to our surprise it was a double jump!  I don’t know how they do it… They must have no fear!

After we enjoyed watching the two jumps, we decided to take a stroll around the markets and find somewhere to have a bite to eat. 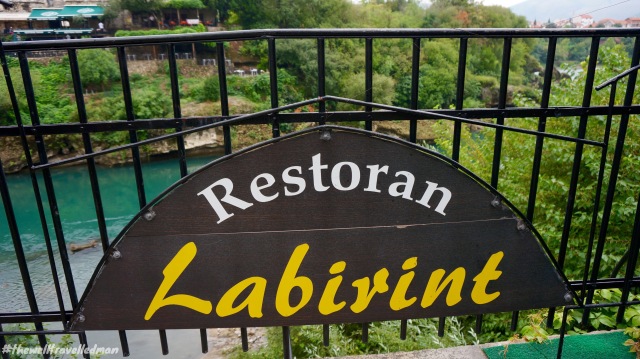 We came across Restoran Labirint which was fairly quiet as it was mid afternoon, and the location was perfect – views of Stari Most!

The staff were extremely friendly and spoke fairly good English in comparison to other locals.  The food was also lovely, taking on recommendations from the waiter!  I tried the ćevapčići, which is local Bosnian sausages, served with a Bosnian pita and salads.  It was delicious!!

We continued to wander through the markets and Jenna found some locals selling some lace doilies, crocheted by hand.  Their english was minimal, but we picked up a piece for Jenna’s Nanna which was lovely and it seemed to make their day!

It was just before 5pm and we needed to get the rental car back by 8pm. The drive back to Dubrovnik is around 2.5 hours and 147 km without taking into account traffic or any unexpected incidents.

The drive back to Dubrovnik

So, as mentioned we left around 3 hours to get back to Dubrovnik which should have given us an extra 30 minutes to allow for delays at border control.  Easy, right? WRONG!

Well, the drive started off as planned, following the route on Google Maps until we get to a cross-section where there is a sign that says ‘Dubrovnik’ with an arrow straight ahead.  Our dilemma was that Google Maps was indicating that we should turn left…  hesitating for a second or two, we decided to follow Google Maps. After all, that must be right.. right?

Well, what an incredibly fun and scary ride this was! The road took us inland, winding in and out, up and down through mountains, past lakes and many, many narrow roads that barely fit two cars.  It was a beautiful drive and I only wish we had a bit more time.

At this point, not being able to drive faster than 50km/h  we quickly realised we were going to struggle getting back to Dubrovnik by 8pm to drop the car back.  So, we started to speed up.. a little… Jenna wasn’t too impressed and held on for dear life, but it wasn’t as bad as she makes out!

After about an hour of weaving through the mountains, we finally got to the other side and see a sign for Dubrovnik, so we followed the sign… We see the border patrol and the Bosnian border control officer said something to us, we smiled and continued to the next guard… who came out and said we weren’t allowed to enter, this is border control is only for residents. Confused, not quite understanding what he was saying to us, nor what the Republika Hrvatska was, we simply said, we’re looking for Croatia!!

So, apparently the Republika Hrvatska is just, Croatia, but long story short we were in such a remote location that only the locals who live in the region is allowed to cross that border as the guards at these borders weren’t trained to stamp our passports. He was a nice guy and directed us to the international border control where tourists are able to cross between the borders.

We rang the car hire company and let them know we were going to be 10 minutes late, and they kindly agreed to wait for us.  We finally made it back, just under 10 minutes late which wasn’t too bad considering what we had gone through! Talk about stressful!!

The moral of our story:  Unless you have lots of spare time, stick to the main roads and don’t follow Google Maps in Bosnia!!

“Stop worrying about the potholes in the road and enjoy the journey.” – Babs Hoffman

9 Comments on “Day trip from Dubrovnik, Croatia to Mostar, Bosnia”

Our most viewed posts…